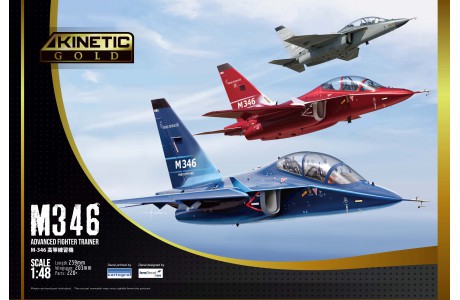 The M-346 Master is a military twin-engine transonic trainer aircraft. Originally co-developed with Yakovlev as the Yak/AEM-130, the partnership was dissolved in 2000 and Alenia Aermacchi proceeded to separately develop the M-346 Master, while Yakolev continued work on the Yakovlev Yak-130. The first flight of the M-346 was performed in 2004. The type is currently operated by the air forces of Italy, Israel, Singapore, and Poland. Since 2016 the manufacturer became Leonardo-Finmeccanica as Alenia Aermacchi merged into the new Finmeccanica, finally rebranded as Leonardo in 2017.
The M-346 is designed for the principal role of lead-in fighter trainer, in which capacity it is used to deliver pilot training for the latest generation of combat fighter aircraft. Powered by a pair of Honeywell F124 turbofan engines, it is capable of transonic flight without using an afterburner, which is designed to reduce acquisition and operating costs; Alenia Aermacchi has claimed that the M-346's flight performance to be "second only to afterburner-equipped aircraft. During the design process, the twin concepts of "design-to-cost" and "design-to-maintain" were adhered to, reducing acquisition and operational costs the per flying hour costs of the M346 are reportedly one-tenth of those of the Eurofighter Typhoon. Outside of the training role, the M-346 was designed from the onset to accommodate additional operational capabilities, including combat missions such as close air support and air police duties.

“ KINETIC GOLD “
With our new manufacturing facilities in place since 2017, the M346 is the first product designed and produced under the engineering system. In order to let the market know the new generation of product, we will label those product with “KINETC GOLD”. Hope it will let the consumer has a new fresh look on “new” Kinetic.


Your Review: Note: HTML is not translated!

Enter the code in the box below: